Meeting the multi-sport athlete Luisito “Louie” Sangalang sent chills up my spine, both for what he had done and by what he was about to do. Here was a man who beat the odds of cancer but cannot stay just on the safe side of the road and live a simple life. He had to prove, for a second chance, that the so-called “fight-for-life” is not just about cancer, but about conquering those demons inside you that constantly say “it can’t be done”. So, he will do an unthinkable: run 42.915 kms of extreme snow and cold in the North Pole Marathon.

In fact, he is the Philippine’s lone representative to the race and Pan-Asian insurer FWD Life Insurance, one of the fastest-growing insurance companies in the Philippines, has got his back on this one, from readiness to the actual footrace. He will join ten (10) other FWD-sponsored runners from Hong Kong, Indonesia, Singapore, Vietnam, and Japan in the grueling marathon. Collectively, the 11 runners are dubbed “FWD Team Asia”. The travel to the Norwegian archipelago alone will be an exciting  trip that can tantamount an item in the bucket list for most people.

The FWD North Pole Marathon runners, hailing from all over the globe, will be running on ice sheet measuring 6 to 12 feet thick which is above 12,000 feet of Arctic Ocean, literally on top of the world. They will be traversing a 42-kilometer path with an average temperature of negative 30 degrees centigrade, even going as low as negative 40 degrees centigrade at times. The marathon is unique because it is run on a small 4.22-kilometer (2.62-mile) loop about 10 times, over hard snow or ice. 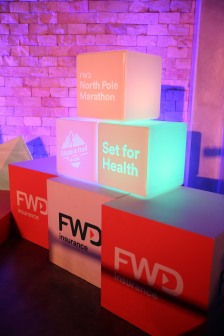 The FWD North Pole Marathon is recognized by the Association of International Marathons & Distance Races (AIMS) and is the only certified marathon that is run entirely on the frozen water of the Arctic Ocean.

To prepare for the race of a lifetime, Louie’s foundation for this extra-special marathon is to accumulate the necessary mileage by joining various local marathons, thus keeping his body in top physical shape. However, to address probably the most daunting of conditions he will be facing, he has to enable his body to adjust to the extreme cold weather by continuously training inside an industrial freezer, with a temperature that mimics that of the negative 30-degree centigrade temperature in the North Pole!, To mere mortals, this simulation of the weather condition in the North Pole sounds crazy enough to give up or give in. But Louie is no mere mortal; he is a fighter through and through.

Louie is grateful for the support given by “The FWD Squad” in preparing mentally and physically for the FWD North Pole Marathon. Triathlon coach Ani De Leon-Brown and running coach Ige Lopez provided the athletic training and guidance. Romi Garduce, the first and only Filipino to have completed the Seven Summits in 2012, gave valuable advice on how to survive the extreme cold.

Other members of the Squad include celebrity mom Maricel Laxa-Pangilinan and son Benjamin Pangilinan, who gave motivational support for Louie, and radio DJ and host Sam YG, who joined Louie in his rigorous training sessions. 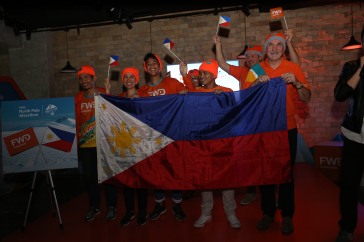 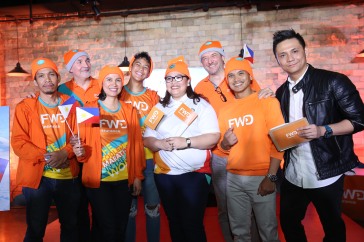 The Fight-Squad is all pumped up! 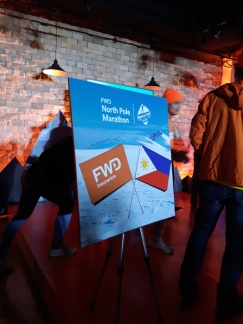 The FWD-PH partnership for the North Pole Marathon 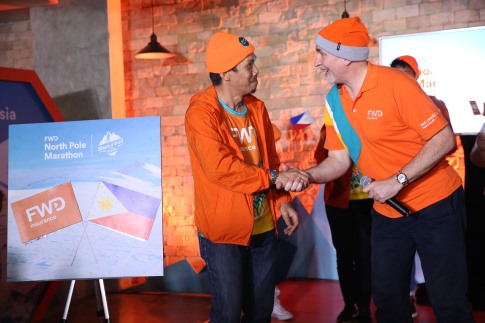 From overcoming life challenges to conquering the world’s summit

According to FWD Life Philippines President and Chief Executive Peter Grimes, Louie’s resilience in overcoming different challenges is one trait that resonates well in Filipinos and this made him the perfect choice to represent the Philippines in the marathon.

“Louie’s inspiring story of being a cancer survivor and his passion for fitness, which he uses to inspire Filipinos to live an active lifestyle, also best represent what FWD stands for: embracing the opportunities in your life without hesitation,” said Grimes.

Apart from Louie, FWD is also sponsoring runners who have their own life challenges but are pursuing the FWD North Pole Marathon experience nonetheless. Representing Singapore and Hong Kong, respectively, are para-athlete Shariff Abdullah, dubbed as Singapore Blade Runner, and the visually impaired Leung Siu Wai.

Louie and his very proud son

The mandatory selfie with Louie

This is the second year that FWD has sponsored the North Pole Marathon.

FWD Life Philippines Head of Marketing, Roche Vandenberghe shared, “FWD saw the North Pole Marathon as a unique and important platform to communicate the idea that everyone should live life to the fullest, stay true to their passion, and not give up their goals, because FWD will always have their back!”

Such is the indomitable Filipino spirit that makes Louie Sangalang a true inspiration!

FWD Life Insurance Corporation (“FWD Life”) is the first life insurance company licensed by the Insurance Commission of the Philippines under the new Insurance Code. FWD launched its commercial operations in September 2014. After its second full year of operations in 2016, FWD ranked #12 in total premium income, up one notch from previous year, according to the Insurance Commission’s report.1 By March 2017, FWD Life is the highest-capitalized life insurer in the Philippines with PhP 2.3 billion in paid-up capitalization.2

FWD Group spans Hong Kong & Macau, Thailand, Indonesia, the Philippines, Singapore, Vietnam, and Japan, offering life and medical insurance, general insurance, and employee benefits across a number of its markets. Established in Asia in 2013, FWD is the insurance business arm of investment group, Pacific Century Group. In the Philippines, FWD has nine business hubs located in key cities nationwide with its headquarters in Bonifacio Global City in Taguig.

FWD is focused on creating fresh customer experiences, with easy-to-understand products, supported by digital technology. Through this customer-led approach, FWD aims to become a leading pan-Asian insurer that changes the way people feel about insurance.

2 Based on publicly available disclosures.

This site uses Akismet to reduce spam. Learn how your comment data is processed.

Abet Ocampo, a lifetime long distance runner, and she is as opinionated as they get. Her interests include running, fitness, health and life.