15% of the world lives with a disability1. Of these, more than 200 million2 have an intellectual disability making them one of the world’s biggest disability groups and one of the most underserved populations. People with intellectual disability face enormous attitudinal, structural, and logistical barriers to obtaining healthcare and getting a job. These compounding factors mean that many struggle with poverty and have significantly shorter lifespans than the general population.

It is no longer just enough to provide for their basic needs. PWIDs (Persons with Intellectual Disabilities) equally yearn for respect, dignity and inclusion..plus a chance to be developed in their niche.

Right from the moment my son Jason was first diagnosed with autism, the future hovered our heads with clouds of uncertainty. While there were specialists and facilities that addressed their intellectual and behavioral disabilities, it became clear early on that we were on our own at keeping my son’s physical state of health in check.

Running has helped this PWA (person with autism) lose the extra pounds and stay fit, especially now that Jason is already a working adult. The good thing about PWAs is that they ARE trainable and that fitness and sports can find a purposeful spot in their lives — just like everybody else. They just need people to believe in them thus Special Olympics was  conceived.

What’s so Special about Special Olympics?

Special Olympics is a non-profit charitable organization that provides year-round sports training and competition in a variety of Olympic-type sports for children and adults with intellectual disability. Aside from sporting activities it is the world’s largest provider of healthcare to people with intellectual disability. Founded in 1968 by Eunice Kennedy Shriver, the Special Olympics movement has grown to more than 4.4 million athletes in 170 countries. With the support of more than 1.3 million coaches and volunteers, Special Olympics delivers more than 81,000 games and competitions throughout the year in 32 Olympic-type sports. It is supported by individuals, foundations and partners, including The Coca-Cola Company, Microsoft, The Walt Disney Company and ESPN, Lions Clubs International, Toys’R’Us, Mattel, Bank of America, and the Essilor Vision Foundation.

Our Very Own Special Olympics Philippines

Special Olympics Philippines is an accredited Program under Special Olympics, Inc. It was founded in August 1979, and provides year-round sports training and athletic competition to over 6,000 people with intellectual disabilities (also known as “athletes” in Special Olympics) in 13 official sports, delivered by over 200 trained volunteer coaches.

Special Olympics Philippines is governed by a Board of Directors and is a registered not-for-profit organization in the Philippines.

When two believers understand RESPECT and INCLUSION enough to move mountains, destiny comes in to lock their fates in a unified initiative that champions athletes from another dimension. Hence, NOTHING SHORT of EXTRAORDINARY happened. The most exciting Pan-Asian insurer, FWD Life Insurance,  launched its global partnership with the Special Olympics, the world’s largest sports organization for people with intellectual disabilities.

“Through this partnership, FWD aims to champion the dreams of young people with intellectual disabilities by creating an inclusive environment that provide equal opportunities,” said FWD Life Philippines President and Chief Executive Officer Peter Grimes. “FWD supports the vision of Special Olympics: using the power of sports to let people with intellectual disabilities discover new strengths and abilities. Through this partnership, we are excited to bring to life our Community Care vision—to empower people to live fulfilled lives.”

FWD and Special Olympics Philippines celebrated the beginning of the partnership with a bowling friendship match participated by athletes from both organizations as well as members of the media, held on April 23, 2018 at The Palms Country Club in Muntinlupa City. In this gathering, it was reported that the Asia-based FWD Group, which launched their region-wide support to Special Olympics in Hong Kong in February, is donating US$ 1.25 million across the markets where it operates: Hong Kong, Thailand, Indonesia, the Philippines, Singapore, Vietnam, and Japan. 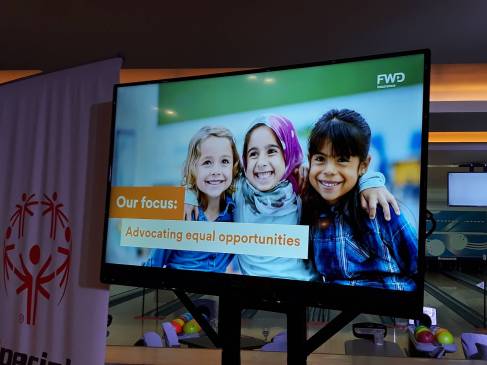 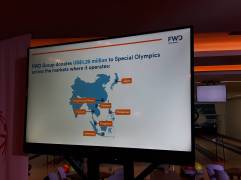 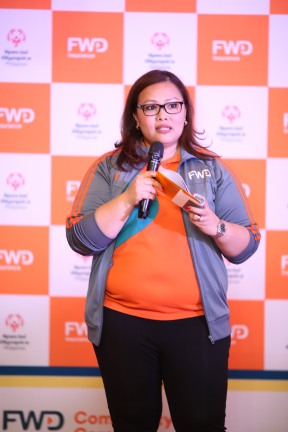 “FWD Life Philippines has always been keen about addressing the needs of people across different lifestyles by teaching them and equipping them to live life to the fullest,” FWD Life Philippines Head of Marketing and Community Care Lead Roche Vandenberghe noted. “Through the partnership with the Special Olympics, FWD hopes to change how society perceives people with intellectual disabilities, that despite their condition, they can make valuable contributions to society and should be given opportunities to do so,” she added.

Kaye Samson, Special Olympics Philippines National Director, said, “We are delighted to welcome FWD to the Special Olympics family. This new partnership with FWD in the Philippines will make a difference to the lives of our athletes and young people. Together, we will collaborate to create a unified generation—people with and without intellectual disabilities working together for an inclusive society, where respect, tolerance, and human equality prevail.” 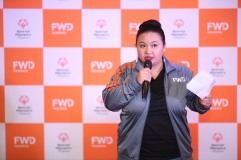 To fulfill their dream of an inclusive environment with equal opportunities for people with disabilities, FWD, through its Community Care program, will support two (2) Special Olympics programs—the Unified Schools and Athlete Leadership programs.

For the Unified Schools program, FWD will partner with Special Olympics in engaging thousands of young people in workshops and unified activities to educate them about people with intellectual disabilities and train them to develop ways to create social change. FWD also plans to invite schools and communities to various sports and non-sports activities involving Special Olympics athletes, to celebrate acceptance and inclusion.

On the other hand, for the Athlete Leadership program, hundreds of athletes with intellectual disabilities will undergo training to be empowered, develop leadership skills, utilize their abilities to undertake leadership roles in the Special Olympics movement, and create inclusive communities all over the world. These activities will be done under the umbrella of FWD’s 2020 Community Care program whose goal is to improve the quality of life of individuals with disabilities in Asia by promoting inclusion through rehabilitation and vocational training and generate positive change for the disabled, their families, and their communities.

“Stop the ridicule, choose to include.”

During the FWD-Special Olympics Philippines partnership launch, FWD Life Philippines also launched its support for the campaign to end “the R-Word” (short for retarded which will always be considered offensive, exclusive and derogatory). During the event, guests and participants of the bowling match pledged to stop using the R-Word and encourage others from not ever using the R-word and other similar words as a starting point towards creating more accepting attitudes and communities for a more inclusive society.

Watch Brina show her leadership skills in this clip:

The event-capper was the awarding of Team White, spearheaded by 2 very talented PWID-bowlers, as Champion in the bowling match.

FWD Life Insurance Corporation (“FWD Life”) is the first life insurance company licensed by the Insurance Commission of the Philippines under the new Insurance Code. FWD launched its commercial operations in September 2014. By March 2017, FWD Life is the highest-capitalized life insurer in the Philippines with PhP 2.3 billion in paid-up capitalization.1 Based on premium income data published by the Insurance Commission2, FWD Life now ranks 10th in the insurance industry in terms of weighted new business premiums.3

FWD Group spans Hong Kong & Macau, Thailand, Indonesia, the Philippines, Singapore, Vietnam, and Japan, offering life and medical insurance, general insurance, and employee benefits across a number of its markets. Established in Asia in 2013, FWD is the insurance business arm of investment group, Pacific Century Group. In the Philippines, FWD has nine business hubs located in key cities nationwide with its headquarters in Bonifacio Global City in Taguig.

This site uses Akismet to reduce spam. Learn how your comment data is processed.

Abet Ocampo, a lifetime long distance runner, and she is as opinionated as they get. Her interests include running, fitness, health and life.